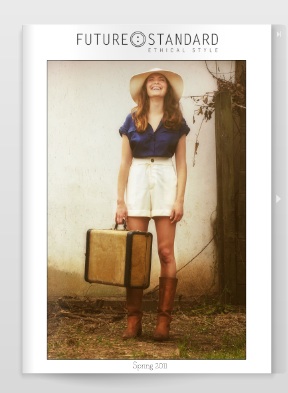 “I think PR is more valuable than advertising. I had a friend who helped us get into Daily Candy, and the traffic and sales we got just on that piece proved to me that we needed our PR outreach to be consistent.”

Jessica Althoff was hard at work on an MBA at USD with an intention to focus on micro-finance when she realized that “just because you believe in something, doesn’t mean it’s a good fit.” Luckily, a conference speaker’s offhand comment about combining seemingly disparate interests into a career opportunity inspired the determined entrepreneur to take her shiny MBA, emphasis in corporate responsibility, and create a company that would combine her longstanding love for clothing with environmental, social justice and labor concerns.

In August, Jessica began to devote herself full-time to Future Standard, an online ethical clothing boutique that “provides ethical clothing & accessories, eco-friendly, fair trade, locally made, anything made with respect to the planet and those who are making it.” After a soft launch to friends and family in December 2010, the site officially launched in January 2011. For Jessica, the driving premise of the inventory is that “every person who touches the garment is getting paid a fair wage.” In addition, almost everything is made using sustainable materials, using sustainable practices, and Jessica only works with vendors that comply with international labor regulations and are certified.

“I have invested a lot on the website and inventory, but I went into this thinking they would be my biggest expenses. The site is a continual work in progress.”

In the beginning, Jessica began researching brands to carry and found the sourcing process difficult but learned that she just needed to dig a little deeper to uncover a multitude of labels that fit in with Future Standard. “A lot of the labels don’t advertise themselves as ethical or ec0-friendly, or position themselves that way, but a lot of them are, they are just focusing [their message] more on being a fashion brand.”

With the site loaded with inventory, Future Standard had a presence at the San Diego THREAD show, and hosted two additional trunk shows to build awareness in Jessica’s hometown in Northern California, and current home in San Diego. The San Diego trunk show was more of a happy hour party, and the other was a more low-key affair that allowed Jessica to share the story of Future Standard one-on-one with prospective customers.

“I think, if I were this blogger, what would I want to write about, how would I want to be approached. I try to write an email almost in the style of their blog. There were a few designers that I found as the result of looking at a fashion blog. When reaching out to them later on, I used that as my introduction. “

Jessica also began to reach out to fashion bloggers immediately, “talking to them about talking to us,” which resulted in some powerful coverage that drove site visits. In addition, Jessica has focused on getting vendors to feature the boutique on their website and social channels, after all “my success is their success too. A few months later, Jessica made the decision to begin working with PR company Elle Communications, to take the boutique to the next level.

“I looked online for fashion PR agencies, but I knew in my heart I wanted a PR agency in San Diego that knew fashion and that I liked. I met with Danielle (of Elle) thinking I would interview several more agencies, but I left that meeting feeling like I didn’t need to. It just fit.”

For spring inventory Jessica focused on color and prints, noting her own predilection for denim and black and that “the hardest thing in buying is not just buying for yourself.” Taking inspiration from WWD, Who What Wear and Refinery29,  tailored shorts and silks also made the cut. For Spring, Future Standard created a look-book and plans to do additional books monthly. Bimonthly email newsletters, coupon codes and summer pop-up shops are also on the horizon.