Made Eyewear launched in Summer 2013 with customizable sunnies and optical frames with virtual try-on service, starting at just $84. Founder Kevin Hundert’s family has been in the industry since the mid ’70s when his grandfather started REM Eyewear, a top manufacturer for the likes of John Varvatos, Converse, Lucky Brand, so Made has come right out of the gate with great designers, materials and quality. The brand relies heavily on public relations with agency partner Samantha Slaven Publicity, and has been already been featured in E!, WWD, INC., The ZOE Report, Who What Wear, and more.

I was lucky enough to ask founder Kevin Hunder all my burning questions about his decision to start Made after spending a few post-collegiate years in the family business, and how PR is helping to shape one of the latest contenders in the disruption of the traditional store-bought eyewear model. 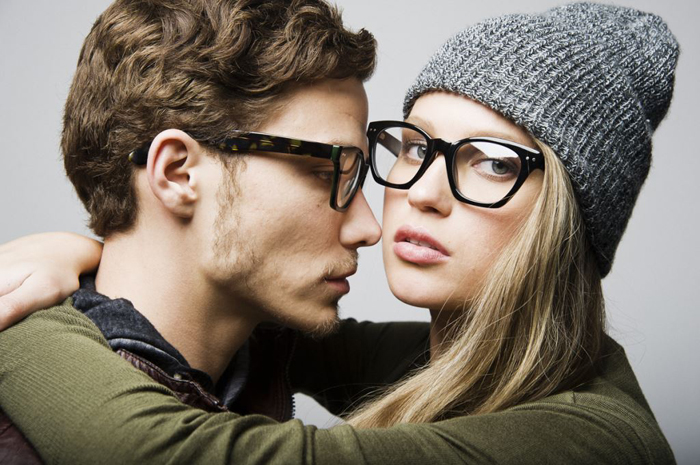 What were some of Made’s key business successes in 2013?

The most significant was our launch.  The idea for Made was born in April 2012 and we launched in June 2013.  We crammed a lot of work into those 14 months, so our launch was a very satisfying accomplishment.  Even more exciting was the attention that we received in the fashion press world.  Some of the top magazines and websites in the country featured us within just a couple weeks of launching.

What role did PR play, if any, in those achievements?

PR was the only reason that we received so much attention at our launch and without it we wouldn’t be where we are today. Our PR team at Samantha Slaven Publicity helped us put together press events in Los Angeles and San Francisco and brought in some of the most influential people in the fashion and technology editorial world. Thanks to those events and PR, we made an immediate splash and garnered some serious attention among consumers, competitors, and investors.  To date, we’ve done very little traditional paid advertising and instead have focused most of our attention on PR.

What is the primary purpose and perceived value of PR in your company?

It’s the best and most efficient way to reach our target market. We can get an article published on a popular website and reach hundreds of thousands of people in one day.  Trying to accomplish that with traditional marketing requires a much more significant investment. We’re in brand building mode and we just want to get our name out there.  PR helps us accomplish that.

In bloggers, magazines, and websites, we get powerful brand advocates broadcasting our brand out to their loyal fan base.  I’d be hard pressed to find a better way to build our brand name. 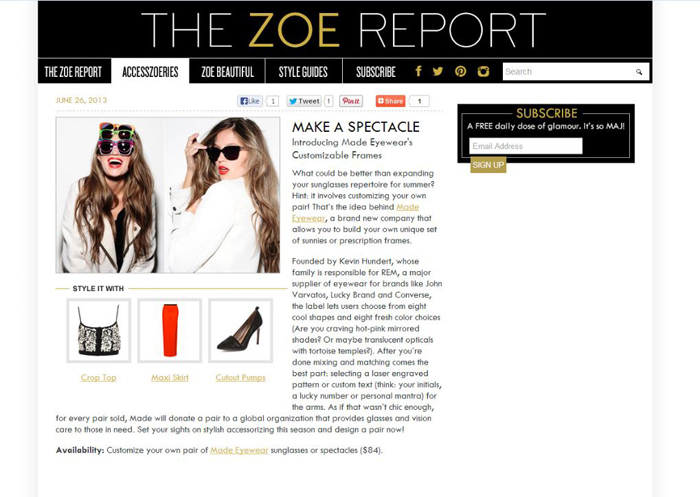 What has been the most powerful piece of media coverage received since your launch? What made it so remarkable?

PureWow.com was great for us. They attended our Los Angeles launch event and just a couple weeks after our launch, they featured us in one of their national email newsletters.  That really was the kick start to a cascade of great press and tons of sustained website traffic. A few other great hits have included the Zoe Report, Women’s Wear Daily, LA magazine, E! Online, Urban Daddy and Thrillist.

Our article in the San Francisco Chronicle was powerful in a completely different way.  It didn’t drive too much traffic or translate to amazing sales, but after the article was published we got calls from a variety of VC’s and angel investors interested in what we were doing and how we were reinventing what was already a disruptive business model in the eyewear industry.

We’re going big in 2014.  We’re going to close a significant round of funding in early 2014 and begin a number of high-impact marketing strategies ranging from pop-up shops to celebrity collaborations to a college campus rep program.  Plus a handful of other exciting, but super top-secret marketing initiatives.  PR will is going to play a key role in getting the word out. Of course we will invest in some traditional marketing, but PR will go a long way in supplementing those traditional avenues to build excitement around our brand and market penetration. 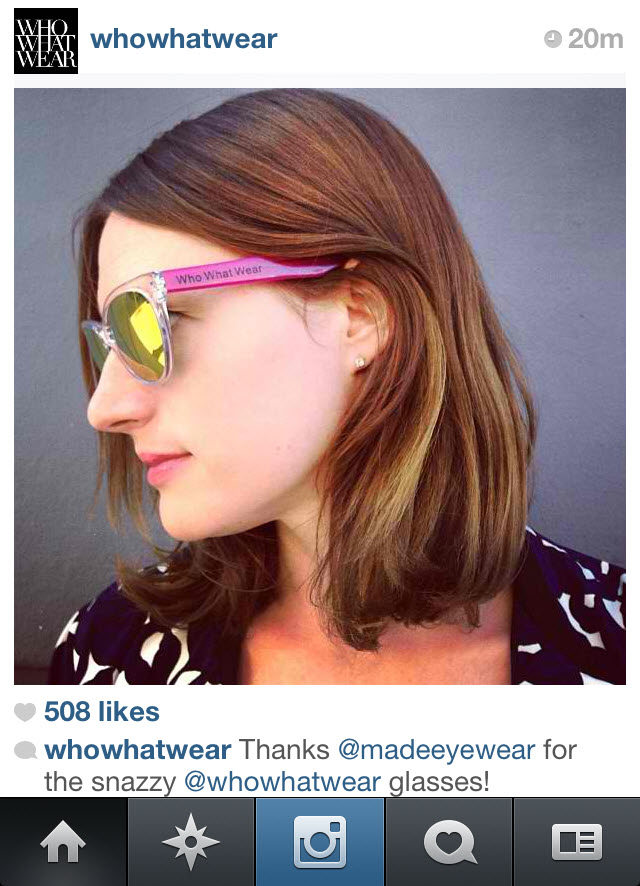 What social media platforms will you be investing the majority of your resources in 2014 and why?

Primarily Facebook and Vine.  Facebook is hard to beat in terms of hyper-targeted digital advertising.  Both paid reach and organic reach tend be more efficient for us than any other social network.  Vine is a bit of an unknown territory still, but we see a lot of value in it.  Vine has a significant number of “Vine celebrities” with amazingly engaged and loyal fan bases.  Add short, entertaining videos to the mix and we see a significant opportunity to reach our target market.  Not so much through our own Vine account, but more by sponsoring already established and hugely popular Vine celebrities.

What are some of the challenges you face in terms of reaching your target customer?

We’ve been a little slow in terms of reaching the college crowd, which we view as a significant part of our target market.  Starting in early 2014, we’ll be rolling out campus trunk shows and enrolling campus reps to represent our brand.  We’ll be starting on the west coast and eventually work our way across the country.  We expect this to really kickstart our penetration into the college market.

What are 3 tips for developing a strong PR agency relationship?

1. Start early. I started talking with Samantha and her team the same week that I agreed with my partners to start this business, yet we didn’t officially launch until over one year later.  We were able to collaborate, brainstorm and build a relationship before we even started doing business.  Because of that, we have a very strong foundation to our relationship.

2.  Collaborate. We view Samantha and her team as an extension of our team.  I bounce ideas off of them even if they aren’t directly related to PR.  I respect and value their opinions and in turn they aren’t afraid to express them.  Sure there are times when we give clear concrete direction, but more often than not, all of our business together is a collaborative effort.

What are your daily reads? Daily essentials?

Originally coming from the wholesale side of the business, I like to keep up on the eyewear industry as a whole. Vision Monday tends to be my go-to source for all things industry related.  That said,

Made Eyewear is a direct to consumer company with a target market that is hip, fashion forward, and tech savvy. As a leader of such a company, I feel that it’s essential to make myself part of our target market.

So 90% of my daily reading is actively following all major social media outlets in order to make sure I’m fully immersed in what’s happening right now.  We even tailor email blasts to current events and what we see trending on social media sites.  I like to compare what we do to South Park Studios.  A significant event can happen on Tuesday and Wednesday night’s South Park episode will be about that event.  Similarly, if a high-profile news story breaks on Tuesday morning, we’ll try to put a comical reference to it in that day’s email blast. It helps us stay relevant and keep the interest of our target market.

What are you excited about these days?

The future of Tesla Motors (and really anything Elon Musk is doing).  Space exploration. The second half of season four of The Walking Dead. Made Eyewear’s new home try-on program.  We’re giving our customers the ability to try-on our sunglasses and prescription glasses absolutely free in the comfort of their own home with their custom prescriptions already in the frame.  No one else is doing it and we think it’s a game changer. I’m super excited to see that grow into an industry-changing program.

Thanks so much Kevin! Be sure to connect with Made on Facebook, and Twitter and their blog.