It’s no secret among my friends how much I love mala bead jewelry company Tiny Devotions. Last year, I spent a lovely afternoon at an incredible hotel with founder Diana Charabin during her visit to San Diego, where she gifted my with the Highest Potential Mala. Thanks to a Pinterest contest, I have since added the Adventure Mala to my collection. I wear them all the time. With malas for every occasion (they even have a break-up mala, for new beginnings) I always want more! From a business and branding standpoint, it’s rather genius. But Tiny Devotions is also a remarkable company with a real love for malas and their ever-growing customer base.

Tiny Devotions is definitely a brand to watch – increasingly, every time I go out or attend a conference, someone comes up to me screaming “Tiny Devotions,” and pointing at my chest, which is hilarious for more than one reason. Recently,  I checked back in with Diana to get a better understanding of where the brand started and where they are headed.

PS: Make sure to read to the end of the post to find out how you can win the Black Onyx Mala, for entrepreneurs, inventors and fashionistas. As Diana explained, “it’s totally the PR Couture mala!”

How did the inspiration for Tiny Devotions come about?

I was living in Bali. I had sold all my things and moved to Indonesia for two months to do a yoga teacher training and craniosacral therapy training, and to have an adventure. I came back with several business ideas and a passion for creating beautiful sacred mala beads – Tiny Devotions was the idea that stuck!

Once you had the idea, how did you go about implementing it?

There was a huge gap between the moment of coming up with the idea and actually doing it as a full time business. At the time I was training to be a lawyer and was in the middle of placements so my mind was far away from doing anything creative or start up wise. I didn’t really take a step forward until I was completely done my legal placement and I had moved to a new city. There, I had no job and really had no idea what to do with my life. I kept getting a lot of attention from people every time I would wear one of the few mala beads that I had made and people would literally chase me down the streets asking about them! {that was a good sign}

How did you begin to get the word out and get your first sales?

This is such a great question and although you think that this moment would be ingrained in my head I actually do not remember the “first sale”. I had a Facebook page before we had a website and the first few months of being “in business” I would make sales through our Facebook page. Facebook was really a starting point for me – its fun and easy and costs no money to get started with one.

How has Tiny Devotions expanded and evolved since that time?

Tiny Devotions was my first business so the whole experience has been an evolution and expansion of myself and the business – in all honestly I had no idea what I was doing when I started – and I still wake up some days feeling the same way – that is the joy of being an entrepreneur – every day is an adventure.

When I started off I handmade all the of the mala beads myself and did absolutely everything from customer service emails to shipping orders. Now, I focus on marketing strategy and growing the business and delegate a lot of the tasks I used to focus on. This lets me focus on what is most important – moving the company forward!

We decided a few months ago to be a 0 advertising company – yes you heard it – zip – zero. Instead of advertising we just decided to be “kick-ass” and inspire our community as much as possible.

We love giving our mala beads to key people in the community who live our brand and embody what we believe in. We definitely have a long way to get in our pr strategy is we have not been featured in a lot of print media and high profile magazines but have more focused online connecting with bloggers and other collaborations.

One of our biggest PR successes was being featured by Kris Carr on one of her videos. Kris is such an inspiration and I know that people send her things all the time – she often sends them back. Thankfully Kris fell in love with our mala beads and without telling us wore three of them in one of her daily videos – it was such a great thing for our brand.

What role does social media play in your PR efforts?

Social media is huge for us, we have a really amazing community and love interacting with them on Facebook, Twitter and Instagram. Our mission is to encourage people to live more inspired and intention based lives and social media really helps us share our message and add value to our community. We do this by sharing a lot of inspiring quotes and images on a daily basis. We want to push people to jump and follow their dreams and having the social media interactions is one of the best ways to do this.

That would have to be the realization that advertising is just not worth it. After taking out some very expensive ads in a very key magazine in our industry we just didn’t see the pay off. We were later featured in this same magazine – and again didn’t see anything significant happen. We would rather do something different with the money allocated to ads such as support other charities, create new products and grow our business.

The other biggest blunder was doing a very expensive trade event at the beginning of our launch. It was in another city and we had to fly out there – lots of expenses: flights, hotels, staffing and we sold way less then we would sell online in a day or two and incurred so many costs.

3 tips for securing publicity for a new brand?

3 things people might not know about the Tiny Devotions brand 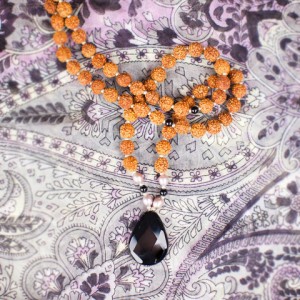 Leave a comment with your favorite Tiny Devotions Mala and why!