Get Involved with Lingerie Fashion Week 2014

Each season takes about 6 months of prep work, and this article marks the first in a three-part series we are running over the next few months to explore the high-level strategy and nuts and bolts of fashion week production. If you haven’t had the chance yet to explore the work being done through LFW, this season is a great time to start.

What to expect at Lingerie Fashion Week

LFW showcases brands via Runway Show, Presentation or Special Exhibition, and the audience demo is a mix of press, editors, bloggers, stylists, designers, retailers, VIPs and further influencers within the fashion, lingerie and creative industries. Press counts for about 75% of the total attendance, consisting of domestic consumer titles as well as both domestic and international trade titles. Collectively, LFW has totaled more than 1 billion media impressions since it’s debut in February of 2013. 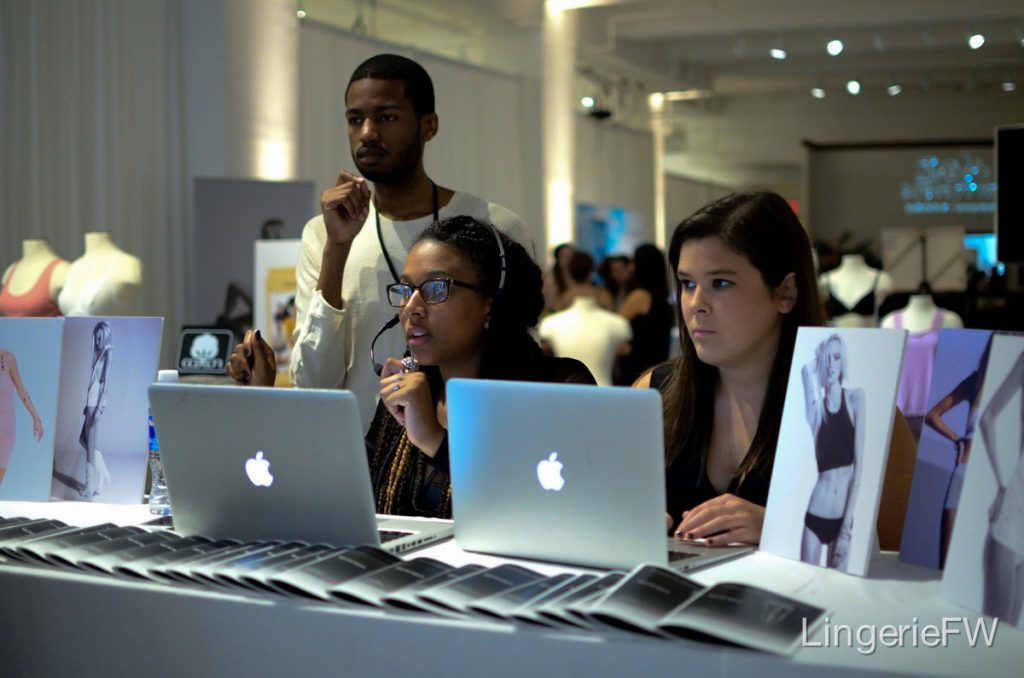 How did Lingerie Fashion Week evolve from idea to event?

Having discovered a fashion PR niche in the intimates space and excelling in securing coverage for multiple brands, Lauren also assisted with PR efforts for a leading intimate apparel e-retailer’s consumer underwear event in 2006, and later led PR for a trade title’s Lingerie Awards Gala held at the Waldorf in 2008. Both of these had staged runway shows, but not in the format of an actual Fashion Week. Several years in, Lauren decided instead of simply recognizing this hole in the fashion week space as an opportunity for someone else to fill, she would take on the task of creating such an endeavor. Her entrepreneurial mind quickly began planning this new venture, which she now produces in addition to ongoing work as a publicist.

Coming from a womenswear PR background where everything centers around the Fashion Week platform, I immediately noticed a gap for intimates. Intimates brands might collaborate with womenswear designers for New York Fashion Week, but there were very few solo shows. We had Fashion Week for womenswear, menswear, even swimwear – but for some reason intimates brands were left out of the equation. I found this especially odd given the breadth of the industry.

To begin, Lauren and team spent about a year in a research phase to identify brands, potential sponsors, timing, and the landscape both in terms of the intimates industry as well as the fashion industry. As part of this phase, Lauren met with a number of brands and industry members to get feedback, asking questions like, “Would you participate in something like this and why? What would you be looking to get out of this and what would make participation worth it?”  The next step was to build out a budget, strategizing on event format and participation options, pricing, how to maximize the event for participants.

We really had to think about how to make the platform unique and engaging for both participants and press, as well as effective to offer return on investment. Then of course logistics come into play – looking at venues, building a team, sourcing vendors, etc. And finally once everything is in place, announcing the event and reaching out to secure participants. Easy breezy, right? 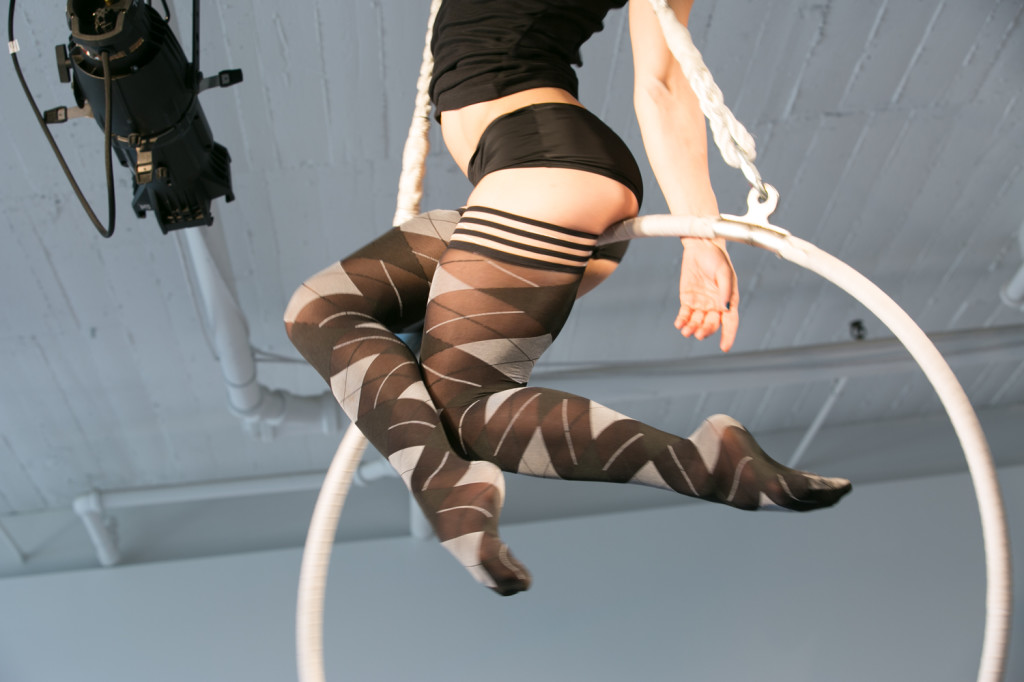 What are the big benefits for participating in Lingerie Fashion Week?

Working with a show team that knows their way around the media machine definitely pays off. All brands holding shows receive a solid amount of press, with an average 50 million+ media impressions per designer.  Shows that have generated the most press coverage include Secrets in Lace, who showcased their own line alongside Dita Von Teese Stockings and Bettie Page Lingerie (two of their licenses), complete with a burlesque performance mid-show and ROCOCO DESSOUS, a luxury lingerie line fabricated from 24 karat gold thread took advantage of LFW to  further tie-in with launch activities, generating coverage across major news outlets including WSJ, ABC News, NBC News, and The Daily Beast.

An engaging show concept is crucial for brands to stand out and catch press attention. The more buzzworthy the show, the more media impressions brands will generate. You! Lingerie cleaned up when they put an army of pregnant models on the runway last August. They currently lead with the most media impressions after being covered everywhere from The Huffington Post to CNBC, San Francisco Chronicle to The New York Daily News, Fashionista to the UK’s Daily Mail, E! News to omg! Insider.

Held shortly following Paris Fashion Week, the 2014 event has been moved to October 24-25, to better coincide with other Fashion Weeks. These dates were also selected based on editorial calendars with press schedules and availability in mind, making the event more accessible for press to both attend and cover. October also fits well with publicists and Press Preview season, creating an opportunity  as well for brands and PR showrooms to merge their SS15 Previews with an on-site Presentation or Runway Show for even greater impact. 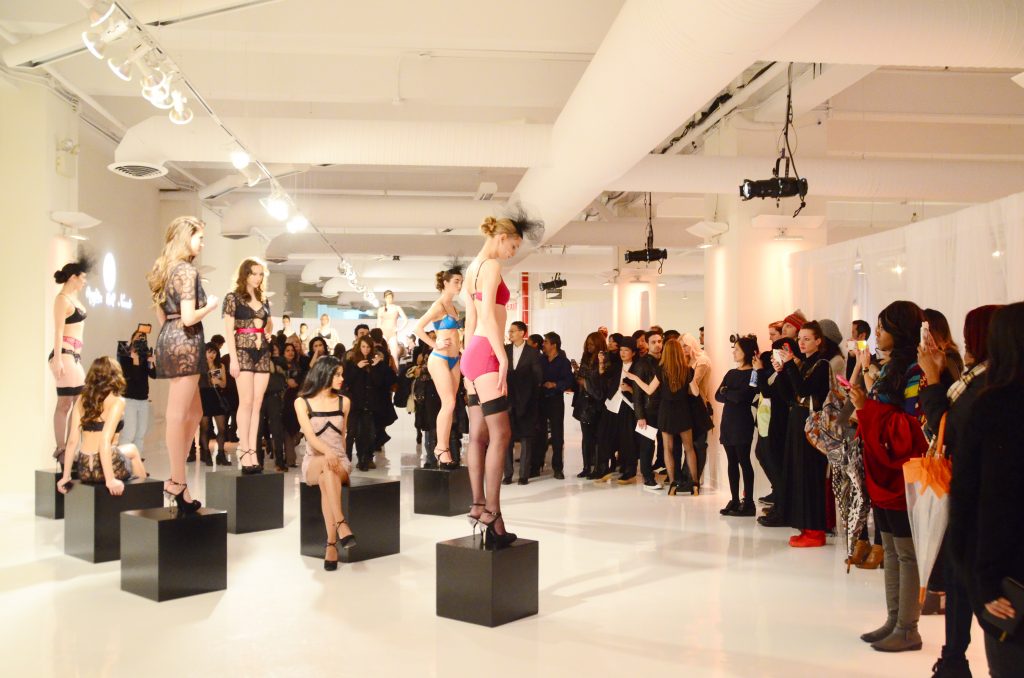 How to Get Involved with Lingerie Fashion Week

Right now, Lauren and her team are hard at work moving from planning phase into the outreach stage bringing brands and sponsors on board. Participation deadline is end of August at which time LFW moves into logistics & execution, followed by heavy PR & promotion.

Previous years have seen anywhere from 1500 – 2000+ individual guests attend throughout a given season. Runway Shows seat 200 with additional standing room, Presentations can accommodate approx. 150 – 200 guests at any given time. In addition to shows and presentations, this year there are two group showcases specifically designed for independent designers, and an on-mannequin showcase, called the Ones to Watch Special Exhibition, offers emerging designers a more affordable way to chance to introduce their line to press.

Past sponsors engaging at the Sponsor Lounge, Gift Bag, Official Program and Show Co-Branding levels have included names within the textile, hair removal, delicates wash, feminine care, haircare, beauty, boudoir photography, media, bottled water, coffee, snack, lingerie subscription box and more categories, but there are multiple retail opportunities as well, including shows or presentations, even pop-up shops. Specific only to this season, there is a unique opportunity for an intimates retailer or brand to join as Presenting Sponsor for LFW’s Closing Show. The only open-to-the-public event held at Lingerie Fashion Week, ticket proceeds will go to benefit PinkChoseMe Foundation in honor of Breast Cancer Awareness Month. Portions of the show may be filmed for OWN’s (Oprah Winfrey Network) “Love in the City” series as well.

Brands or retailers interested in holding a show: brands@lingeriefw.com