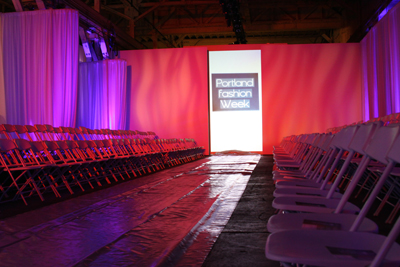 The decision to fly up for Portland Fashion Week was rather spontaneous, a few tweets exchanged with Bethany Waggoner, the voice behind the @portlandfashion account and, conveniently front of house for the event, and I packed my bags. After recently returning from Mercedes-Benz Fashion Week in New York City, I was interested in attending a smaller event and was especially looking forward to PFW’s eco-fashion focus. 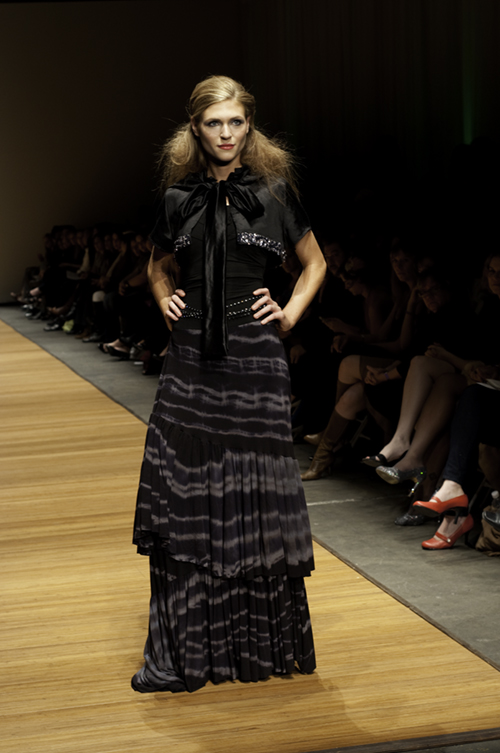 This was PFW’s sixth year, Project Runway winner Leanne Marshall is known for showing here in 2006 and in 2007, Portland Fashion Week became been the first sustainable production of a fashion week in the world. The 2009 event was executive produced by Tito Chowdhury and Christopher Cone and attracted airline Luftansa as well as Spin and Surface magazine (and others) as sponsors.  The event was held at the Vigor Shipyards in Swan Island and featured over 50 designers over four days who walked an eco-sustainable bamboo runway. 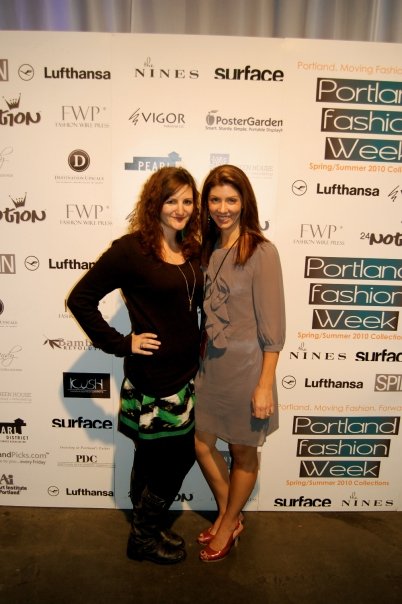 For someone visiting from out of town, the location of the shows was a bit out of the way (what? no hybrid shuttle from downtown!), so I ended up only catching the Friday night and Sunday night evening shows. Both nights I was welcomed warmly by the front of house team, both nights were buzzing with attendees (so much so that my press pass ended up being a scrap of green construction paper!), both nights the runway shows started 1+ hours late – but hey – it’s fashion. Lucky for me, I was able to chat it up with Andrea Pohlot of Little Designer Book which helped pass the waiting time. 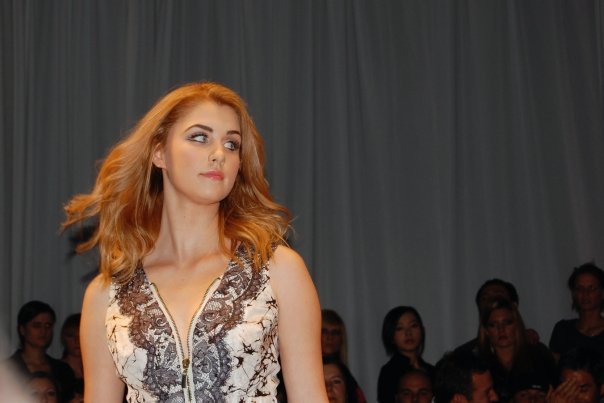 The collections varied from underwhelming – jersey bubble dresses? – to quite lovely, I gravitated toward the more romantic pieces and structural, evocative party dresses. A few of my notes are pretty fun – I scribble ooh finally – prints! only to then correct myself with…Target shower curtain print? Ah well. Favorites of both night include recent SMTP designer Jesica Milton – it was great to see the Jordie dress go down the runway and I loved her splatter paint fabric.Wyatt Orr sent down a Lolita-inspired frock that had me salivating, and Mountains of the Moon sent down a beautiful long pink dress that caught my fancy. Colors were definitely varied but light gray seemed to dominate – light gray with blue, neon green or pink were popular choices for spring/summer. All of this was fine and good, but it was really the story behind Anna Cohen’s Imperial Collection, which closed the week, that felt closer to what you would expect from an eco-fashion show. After four collections had gone down the runway, a rather unorthodox thing occurred. A woman in a fringed leather skirt and black mules took the stage and shared a story. It began at the Oregon Trail and ended with hand-crafted, all natural woolen fabrics created with sustainable practices, designed by revered eco-fashion designer Anna Cohen making their way down the runway. Jeanne Carver spoke of the interconnectedness of all things, the desire and need for balance, and the story of how the Imperial Stock Ranch evolved through partnerships with weavers, fashion designers and grants to grow a sustainable textiles component whose vision was realized with the Anna Cohen Imperial Collection holiday preview that night.

I wondered, as I watched the designs make their way down the runway, and then aloud to Jeanne and Anna after the show was over, why we always assume the clothes should speak for themselves and the designer just pops his/her head out for a quick bow at the end of the show. Was my experience of the collection different when knowing the history and the hard work that had gone, not only into their construction, but into the partnership and faith of a few people who realized a vision and brought together two disparate industries to find common ground and a powerful story?  In speaking to Jeannie and Anna I was reminded that clothing is more than fashion, it is the thread that sews the button, it is an interconnected web of people who create the clothing we wear.

Would it feel differently to wear something you know was made from the wool of sheep who were raised on a ranch that practices what they call “mindful stewardship?” And what is our responsibility, as members of the industry, to tell these stories and support these kinds of partnerships. How can we be mindful stewards of those who are working to provide fashion that nourishes the earth? Big questions, ones I was thrilled to find I really enjoyed asking.