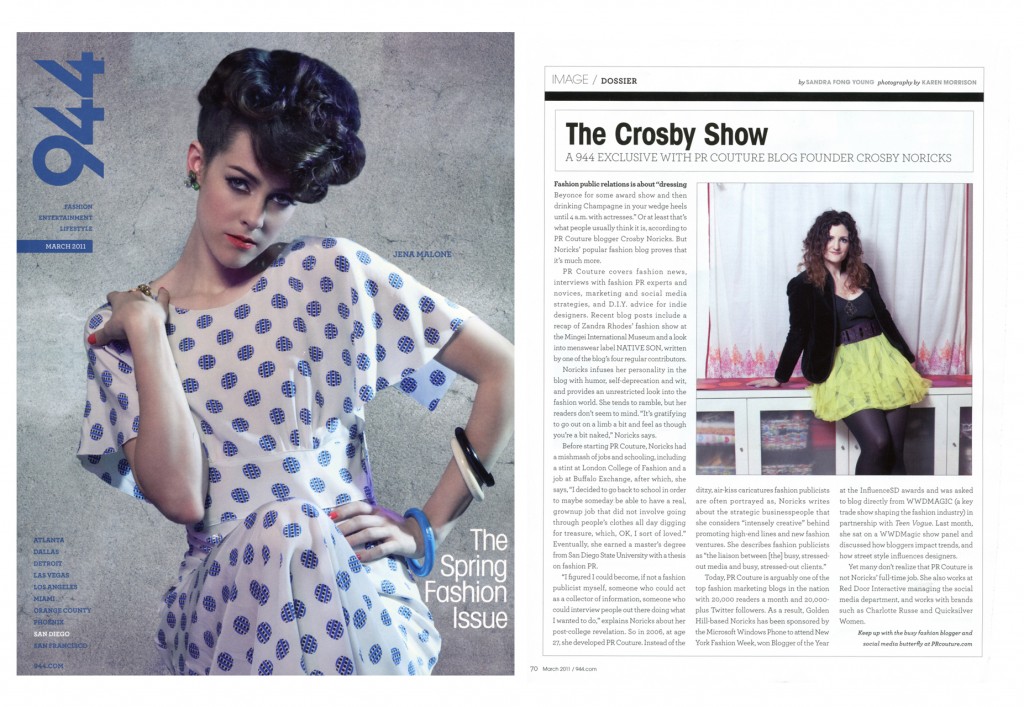 Oh kittens! A few weeks ago (while on a conference call) I turned into “that” woman – the one wrapped in white earbud cords jumping up and down in the Barney’s dressing room, shimmying into a something or another while occasionally taking herself off mute to contribute some piece of social marketing absolute brilliance (I’m sure) before settling on a pair of camel colored leather shorts from The Row that were a zillion percent off. Leather Shorts.

The reason for all this madness was a Real Photo Shoot. For a Real Magazine. Swoon. 944 had let me know they were interested in doing a profile on me, and after author Sandra Fong Young sent interview questions (which i responded to late at night after a nightmare airport experience in Denver where it was about the temperature of a frozen penguin), the next step was meeting up with photographer Karen Morrison for a shoot in and around my neighborhood of Golden Hill.

It was very fun to run around my streets and barrage my local bartenders and consignment furniture store owners for use of their space, as well as take photos in front of my favorite house on my street (I call it the Secret Garden House). As evening commenced, we wrapped things up right in my own little cottage, setting up lights and turning my living room into a photography studio of sorts. I had this idea it would be fun to pose under this glitter name banner by BFF surprised me with once upon a birthday and I’m happy to say that concept (the last one we did, of course!) made it into the mag. Oh, and I did not end up wearing the shorts. Instead I wore a bunch of great stuff from BCBG Runway, Hayden Harnett, Madewell, and older, beloved pieces, like a vintage velvet blazer from high school. High school.

The photo below is one of my favorites ever, and is I think one of the best captures of my general this and that.

In any case, I will say that after being the one writing about other people for so long and turning their names into adorable witty headlines, and turning their questions into articles, it was bit unnerving to have it done to me. There really is a special power to print pubs. Good lesson for this fashion PR girl! Friends of mine have also taken to yelling, “The Crosby Show,” whenever I show up anywhere, much to their never-ending enjoyment and my general blush.

But the final word is that dress ups, photo shoots and magazine article are very sparkly stuffs and I had a wonderful time. Thanks 944!