(Re)Blog This: How Fashion PR Agencies Use Tumblr

The New York times has suggested that Tumblr is a Facebook/Twitter rival, noting Mark Coatney, former senior editor at Newsweek’s transition to Tumblr, where he’ll be working to position Tumblr as a platform for journalists and readers to meet. Coatney has said that the engagement of the Tumblr community is more valuable than the number of followers, explaining that “Newsweek has 100x the numbers of followers on Twitter as it does on Tumblr, but was getting 10x more engagement from those Tumblr followers.” In July, TechCruch has reported that Tumblr is now at 1.5 billion pageviews a month with 6 million users users posting some 4.5 million posts a day.

I have had a Tumblr for a little over a year, and use it primarily as a found scrapbook of sorts, a place to put all the images, quotes and links I come across during an average day spent online (like the above shot of Dame JC)! I also enjoy looking through my dashboard at the people I follow and am often inspired by what I find – Cute Boys with Cats and Me In My Place are two favorites (careful on that last one, it might be NSFW!). Popular fashion blogger Jessica Schroeder has the rapt attention of thousands of followers on What I Wore, and LOFT chose Jessica and Tumblr to launch their social media initiative (though that URL now redirects to the LOFT site).

Recently I noticed two fashion PR agencies, Style House PR and Digital Candy PR using Tumblr as their preferred blogging platform, albeit in slightly different ways.  SHPR uses their Tumblr primarily to promote client coverage and press releases, (though the occasional YSL quote makes an appearance!) and directly links to it on the SHPR website. Digital Candy PR just recently launched their Tumblr and tends to post inspirational fashion photography, they have yet to link out to the blog on their site. 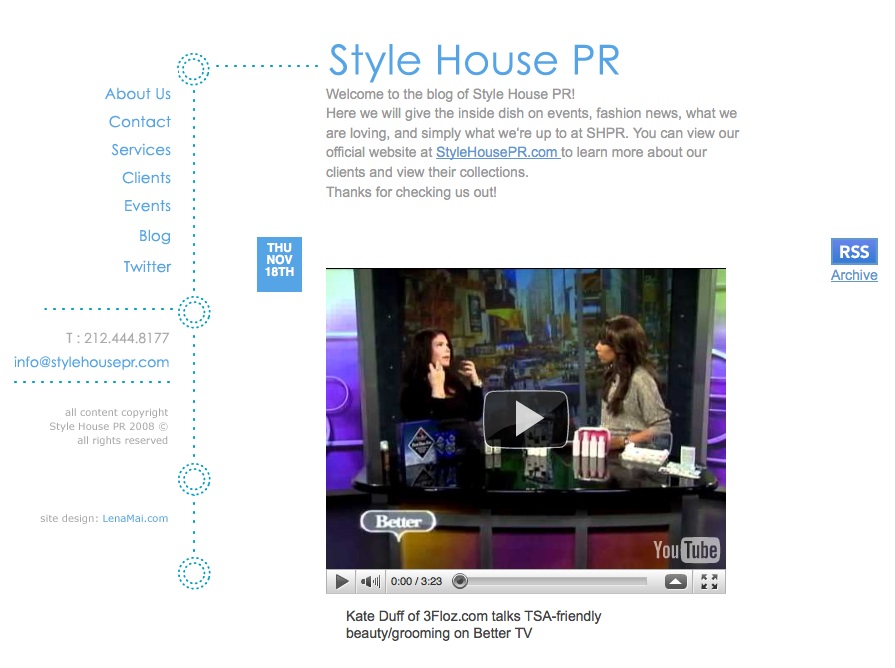 Unlike a blog platform like WordPress or Blogger, Tumblr allows you to quickly upload or grab content from the web and republish it. For example, I can grab a bit of text, or simply press my “Share on Tumbr” bookmarklet and instantly share a YouTube video or photo from Flickr. Users follow each other and then scroll through all of the posts made by those they follow through the Tumblr dashboard (like an RSS Feed).  Users then have the option of clicking a heart button, or “reblogging” that post onto their own Tumblr. There are other options, like customizing your theme, groups, tagging posts and getting listed/recommended in the directory, but as with most things, it really works best to try it out for yourself!

Unlike having to update a press page on a static website, Tumblr can be an effective way to spread the word. Janna Meyrowitz Turner, CEO of Style House PR explains, “we made the decision awhile ago not to have a section on our site with our clients’ press mentions. Initially it was to create fodder for our blog and because its much easier to add our client mentions that way, but it’s become a highly efficient way to share press hits – from fashion and beauty blog and online hits, to print and TV clips.”

For Teresa La, CEO of Digital Candy PR, the decision to use Tumblr was based on two things, the community and the usability; “Tumblr has a deeply rooted fashion, art, and entertainment community and I wanted to connect with these groups through a visually focused social platform.  This factor, combined with the ease of reblogging, following other Tumblr’s, and posting an update in just two clicks were the selling points.” Teresa also considered WordPress and Posterous, but chose Tumblr because she wanted “a short form blog with a minimalistic interface design that could be maintained on the go.” Tumblr won due to its roots in the artistic community and iphone app. With the iPhone app, a fashion publicist can easily post updates from a fashion show, or behind the scenes footage from a photo shoot, and quickly syndicate to multiple social channels with a single click. 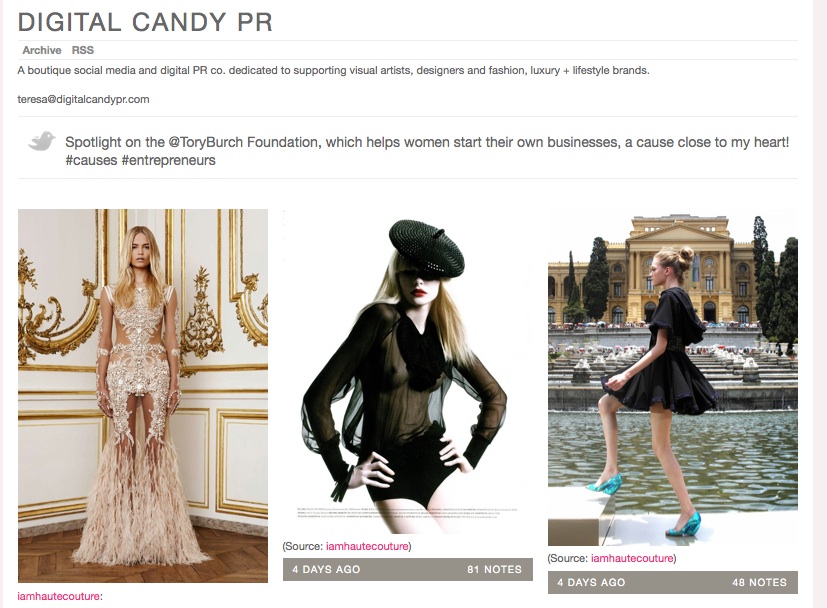 Provide a value and service to your clients (and the media you work with!)

Janna recommends Tumblr to clients like 3floz, saying, “we love the “reblog” feature because our clients can easily reblog what we post to their own Tumblr.  Our blog posts feed to our Twitter and Facebook page, and our clients can easily share or retweet from there.  Our clients love both how quickly we are able to post press mentions, and in-turn how readily available the links and/or scans are available to them to release via their social media channels.” Bloggers and other online outlets also appreciate when SHPR links out via Tumblr because it increases their traffic and social media followers as well.

Both Janna and Teresa incorporate some elements of SEO into their blogging practice.  Janna explains, “When a celebrity wears our clients’ item we include their name in the post and in keyword in hopes that someone looking for the jean that their favorite celebrity is wearing will stumble upon our post.” She adds that for e-commerce clients, mentioning additional brands that are sold on the site helps betters client relationships with their vendors, further cementing partnerships.

Share Your Aesthetic and Personality with Media, Future Clients or Employees

Fundamentally, Teresa explains, “Tumblr is a way for Digital Candy PR to showcase our fashion and design aesthetics through a platform catered for this purpose. For brands shopping for a social media company with a certain aesthetic and curation, the content on our Tumblr is one way to get to know us. For clients, it’s a platform for us to share their creations and content with a community of enthusiasts that can then become ambassadors for the brand.”

Teresa did all the setup herself, and Tumblr provides many themes (most are free) that can really highlight media – big delicious pictures, videos files as large as 100 MB, even audio posts.

Are you a fashion PR agency or brand using Tumblr? Do you love it?