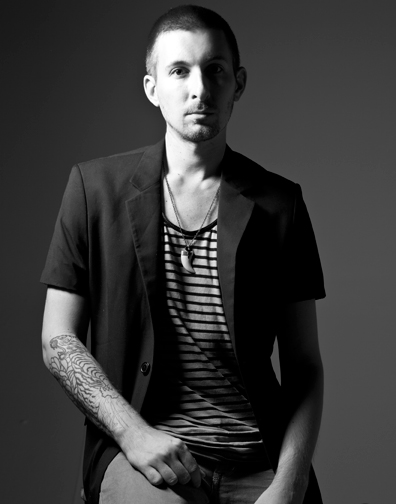 My goal is to be a fashion designer, not a celeb-reality star. – Ben Chmura

Over the years, viewers have confirmed that fashion makes for good TV.  Numerous show Lifetime’s Project Runway, Bravo’s The Fashion Show, and  The Rachel Zoe Project are just a few of the shows that have brought the fashion industry to the living room of millions, changing mass perception about how the industry works. Fashion glossies and  Fashion & Celebrity PR  have also gotten in on the action with The Spin Crowd, PoweR Girls and of course, Kell on Earth.

As our obsession with reality-style television grows, it’s worth asking the question: what is the real impact on the fashion industry. How accurate are the edited episodes and what kind of repercussions exist for those in the seasonal spotlight?

Ben Chmura, one of my clients and  fashion designer and finalist on Season 7 of Project Runway was kind enough to share his thoughts on the experience and the fashion reality show trend.

How would you describe your Project Runway experience?

My Project Runway experience was uncomparable to anything I’ve done in my life. It is truly an opportunity that changed my life because not only did I accomplish one of my goals (by getting on the show and showing at Mercedes-Benz Fashion Week), but I made some incredible friendships in the process. To me the friendships outshine the prize of the show because these are relationships that will last for a long time to come.

What has been your fondest or best memory?

My fondest memory of Project Runway would have to be my first time that I spoke with the judges about my Marie Claire cover dress. Having the opportunity to explain your work to an editor-in-chief, such as Joanna Coles, is such a feat in itself. Also, because I almost won that challenge and I finally began to feel like myself.

What has been your worst experience or memory as a part of the Project Runway cast?

I think my worst experience with being a part of the cast is hearing the criticism from people who watch the show who don’t necessarily understand what it takes to make a garment. There’s a great deal of judgment with everything that you do and no matter how much preparation you have in your life, you still are never fully prepared. I think the other difficult experience was the misconception that because I was on television I was instantly successful and wealthy. The show is a voluntary process and we didn’t make anything off the show unless we worked for it ourselves.

How has being on the show impacted your career as a fashion designer?

Being on the show has slowly impacted my career as a fashion designer. I think that for a couple of reasons: 1) I wasn’t a flamboyant character on the show. I acted like myself and didn’t “turn it on” for the cameras. Unfortunately, there is a great deal of response in the industry to “characters.” Not to say they aren’t talented, but it does help in getting them partnerships/financial assistance. 2) The main reason for the slow impact is because Project Runway is a stepping stone. We have to work just as hard, if not harder to make it in the industry now that people have larger expectations from us. I moved back to New York (from Tampa) last summer and a former employer offered me a job (she was a fan of the show) and I’m now overseeing our graphics department and spearheading new production with factories in Honduras for the company. Through this experience I’m making connections to start working on my own collection again through proper channels.

How did public relations or social media play into your experience as a designer before and after Project Runway?

Before Project Runway I didn’t use public relations like I should have. But, it’s also very difficult to add that into your budget when creating the clothing is a huge expense in itself. I relied on social media and DIY PR in the beginning and honestly, that will only take you as far as you want it to go. You really need to live on the computer and network in order for it be beneficial as a ‘free’ expense. Social media can be a tricky thing if you’re not PR savvy. After being on the show, being able to have public relations was a great experience for me. I worked with Lifetime’s PR department and fashion PR firm, White Book Agency. It definitely helps to work with someone in PR that you know has connections outside of your capabilities.

PR helped me to have appearances at venues and events that I normally wouldn’t have had experience with or even know how to begin the process. It also helped the community know more about me as a person and as a designer, forming a connection between myself and the community. Isn’t that what it’s really all about anyway? Sure, the product is important and can speak for itself, but if the customer doesn’t have some sort of connection with you, then you’re just another designer.

I still feel more fashion designer. The show has definitely helped increase my fan-base and I still get recognized on the street, but after the show you have to learn how to transition back into being a normal person and focus on your goals. My goal is to be a fashion designer, not a celeb-reality star.

What advice do you have for anyone who wants to participate in a reality show?

Be prepared for the feedback. This industry is hard enough and you need a thick skin in order to survive, but being on an international show is a whole new territory. The other important piece of advice is to just be yourself. Stay true to your integrity because at the end of the day you have to answer to yourself.

What do you think of all of the fashion reality shows and how will it impact the industry?

I honestly think it’s starting to get a bit redundant. How many different concepts can you develop? I think Project Runway started an amazing phenomenon that I’m truly grateful for being a part of, but do we really need one on NBC now? I think it’s had a mild impact on the industry. Many people from the show are doing great things, but we’re all not household names or in every fashion magazine. We still have to prove ourselves to the industry just like anyone else. Getting on a fashion reality show doesn’t give you a ‘get-in-free’ card to the industry.

What are you up to now?

I’m currently the Art Director at a company that designs licensed apparel for Nautica, Izod, Dockers, Perry Ellis and Tommy Hilfiger. Through this opportunity I’ve formed relationships with factories and buyers that are beginning to turn into possibilities for my own work. I took a year hiatus to re-adjust to the move and get settled into my career.

After the break I’ve already begun sketching and sourcing for my new collection. It will debut in Jan 2012, which I’m very excited about! I’m working with a creative team that consists of musicians, videographers, and photographers to build a multi-media presentation to reach a broader audience. I also just returned from Bangalore, India, where I was invited by Raffles Millenium International College to be a guest judge at their senior fashion presentation; and recently I’ve been invited to show at Styleweek Providence next year.

What are your future goals?

My goal is to continue showing the fashion industry what I have to offer. After much reflection (post-show) I realized that I have a unique voice and I have a point of view that is relevant and worth being a part of the industry. Now I need to continue exploring my relationships that I’ve been building and turn them into business ventures. I’d like to sell a small collection each year that will be accessible through small boutiques and e-commerce. I’m a huge believer that less is more and small concise collections that can be merchandised through an entire year, rather than season-to-season, makes more sense to me as an independent designer. I’ve heard of too many horror stories of young designers who get their first huge order and then go bankrupt while trying to fulfill it. I want to be smarter than that.

[update: in the original published version of this post, due to editorial oversight, Ben Chmura’s last name was spelled incorrectly. We regret the error – CN]