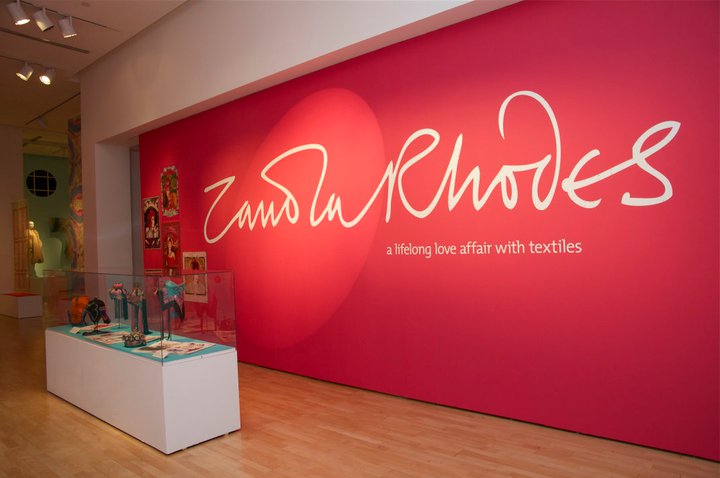 In the spring of 2000, I spent a semester studying fashion marketing and merchandising at the London College of Fashion. In some class or another, I was assigned a paper topic having something to do with textiles (ha! memory gets a bit foggy after a decade – egads, a decade), and given the names of two designers, Sonia Delaunay and Zandra Rhodes. I enjoyed the abstract geometrics of Delaunay and reading about her artistic exploits with husband Robert (the couple coined the Orphism art movement), but it was Zandra’s zest pink and purple, her use of lipstick bottles as patterns, that really struck my fancy. And, as a former pink-haired girl myself, I have a supreme fondness for any woman over the age of twenty-five that has unabashedly stayed pink.

Zandra splits her time in London and Del Mar (a city just north of San Diego), is also the the founder of the Fashion and Textile Museum and was recently Zandra Rhodes was appointed Chancellor of the University for the Creative Arts. Luckily for San Diego, Zandra allowed another museum, the Mingei (my favorite – best gift shop!), to produce a running exhibition compiling forty years of work. I immediately became a member and attended the opening of the exhibit where after much encouragement from friends (I am really very shy, you see), was able to meet the Jem-haired dame and blab for a moment about my academic introduction while The BFF had her book signed by Mz. Rhodes and splurged on a scarf.  I then signed up for a denim workshop, she kindly gave a face to my puffy-paint style golden mermaid. It followed then, that I just had to attend the museum’s fashion show and auction, and the Mingei were lovely enough to oblige. I can only imagine what it must be like to be the center of such an event, to be celebrated for decades of art, effort and commitment to ones passion and to draw so much appreciation and love for one’s contributions. And yet, to perhaps be also keenly aware of one’s own history, to relive the dresses, caftans and robes and be reminded of the times, the people, the important things, when they were created…I would guess it to be sort of sad sweetness for time passed and quiet pride for the legacy that has been left. But I have a feeling Zandra is far too busy living than to fall too far down that rabbit hole.

The fashion show took place amidst the standard white tables, clinking glasses and sequined attire of most high-brow museum events, but with a slightly psychedelic flair. The backdrop was lit pink (of course) and the wishbone style runway was decorated from above via what were perhaps hundreds of single fabric scarves tied to the ceiling. Zandra curated an enjoyable experience beginning in 1969 and continuing through to today, and set her designs against a musical backdrop that included everything from Abba to Enya. Models carried miniature disco balls, tossed paper petals and danced. Hooray for more activity on the runway than turn, pivot, turn. The hair and make-up was particularly fabulous, big brassy hair, bright lips and tribal eyebrows – delicious.

The final touch? Dessert featuring cookies in the shape of a Z covered in pink sugar crystals. After the show, I caught a young model leaving, feathers in hair and make-up bold as ever, wearing jeans, carrying one of those imposing history textbooks. Fitting, no?

Photos courtesy of the Mingei International Museum. More photos are available on their Facebook Page. The exhibition Zandra Rhodes — A Lifelong Love Affair with Textiles, goes through April 3, 2011.